As I write this, my wife and I are sitting in a hospital room with our newborn son (say “Hi” to everyone, Eddie) and she just read me a story about the New York Yankees and Boston Red Sox putting aside their legendary rivalry in order to hold a joint Hurricane Harvey benefit auction. It’s a lovely surprise and it warms the heart. It also makes me think about who else could do such a thing to help people in need. In particular, because of the rich veins of nerdery that flow through my body, I’m thinking about comic books. 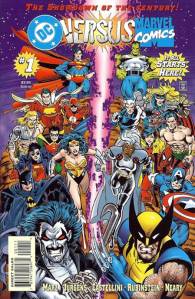 I know both DC and Marvel Comics have said no to doing any future crossovers, but hear me out.

Right now there are hundreds of thousands of people homeless because their homes, lives, and businesses have been destroyed by Hurricane Harvey. In terms of sheer size, it’s probably going to top Katrina as the worst natural disaster in American history. It may have done so already. I’m honestly not sure. For what I think are obvious reasons, I’ve haven’t been able to watch the news super-closely this week. But what I do know is that rebuilding will take years and potentially billions of dollars to restore the parts of Texas and Louisiana devastated by this storm. 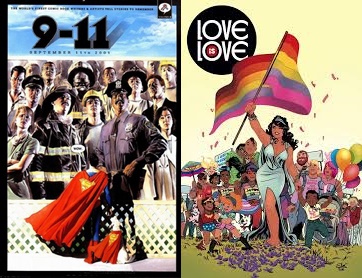 Both Marvel and DC, in the past, have done benefit comics in the wake of tragedy. Marvel put out two different special comics after September 11, 2001. DC teamed up with other publishers after 9/11 and in the wake of last year’s shooting in a Miami nightclub. Over the years, both companies have published special edition comics about things like child abuse, substance abuse, land mines, computer science, literacy, and oral hygiene. It’s not like charity comics are a new thing. 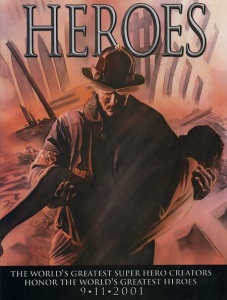 How about a DC/Marvel Harvey benefit book? No huge, universe-shattering event. No years-long buildup or hair pulling over how it effects continuity. Not even any of that stupid, fanboyish, inherently disappointing “who would win in a fight” crapola, since each short story would be about heroes coming together to help people in need instead of seeing which one could punch harder. It probably wouldn’t be too difficult to find creators willing to donate the time to do short stories (between five and ten pages, probably, no more), and you’d put together the biggest characters from each publisher:  Superman/Spider-Man, Batman/Iron Man, Wonder Woman/Thor, and — because you know it would put assess in the seats, Deadpool/Harley Quinn.

It would be the best-selling comic book of the century, AND it would raise a much-needed fortune for people in distress.

It’ll probably never happen, I know, but wouldn’t it be awesome to see the two leaders of an industry that makes its money telling stories about heroes set aside their differences so they could actually BE heroes for a change?

PS – Oh, and the capper? The one thing that could make the whole thing even better for long-time comic fans? If they could somehow just call the book”Harvey Comics.” Just saying.