As I’ve mentioned here before, I am a high school English teacher, and today I’m going to tell you something about teachers you may not know. Teachers almost uniformly are fast eaters. It isn’t our fault. Think about how long you have to eat at your job. A half-hour? A full 60 minutes? In which time you may be able to run out and grab a bite, or eat right there in the office breakroom, or any number of perfectly reasonable activities that you can easily accomplish before it’s time to sit back down and get back to looking at Facebook until it’s time to quit.

As a teacher, we get 20 minutes. In that 20 minutes, we have to walk to the faculty lounge from wherever the hell on campus our classroom may happen to be, sometimes heat up our food, eat, and try to be back at our doors before the bell rings. That might not sound too bad, especially to you half-hour lunchers, but keep in mind that we have absolutely no flexibility. We can’t take our lunch a little early if we’re hungry or postpone it a little bit if we’re busy. Also, any little thing can eat into our lunch time — if a student wants to ask you a question, if they haven’t left your classroom yet because they can’t find their pencil, if an overly-friendly coworker strikes up a conversation while you’re jogging down the hall to the faculty room. These things can all make you have to wait to begin your lunchtime, but nothing can postpone the ending. It’s even worse in the lower grades, where teachers often have to walk the students to the cafeteria personally and meet them at the door when they finish. And if you need to go to the bathroom during this precious 20 minute sojourn? Let’s just say lunch can quickly become an object of fantasy, like the Golden Fleece, or a detergent that can get out ink stains.

The point is, fast eating is an ingrained habit, something that we can’t just turn off when we leave work. We tend to eat quickly even at home, in restaurants, and when sitting down with our significant others. My wife often looks at me during mealtime like I’ve unleashed a half-starved raccoon on the plate, and it’s not at all unusual for me to be completely finished while she’s still staring down five ounces of steak and enough potatoes to feed a small third world village. 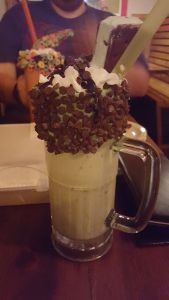 There is only one exception to this black hole style of speed-eating, and that’s ice cream. For reasons neither of us can fathom, when Erin and I sit down to ice cream she always finishes hers well ahead of me. And I’d like to say that it’s only since she became pregnant that she stares longingly at my bowl and makes eyes at me after she’s finished hers, but we all know that would be a lie.

Since her pregnancy, however, she’s far more likely to blame things on the baby. She’ll peer into my bowl, hers sitting empty on the table, and say “You have ice cream. I have no ice cream. The baby has no ice cream.” And I will then glare at her and point to the freezer, because I love my wife and I would do almost anything for her and our child, but come on, ice cream.

I suppose I should be grateful that she hasn’t had any wild cravings, like pickles sprinkled with Pixie Stix, bacon and peanut butter sandwiches, or Pepsi Max. In fact, there have only been a few times since she’s been pregnant that she’s been overcome by a specific craving. She’s gone wild over a particular brand of chocolate milk, which I will not mention here by name because I’ve already paid the CEO’s salary for the quarter and I’m damn sure not going to give them any free advertising. Then there was the night when she was working late and I texted her to ask what she wanted for dinner. “Pizza,” was her reply. Well, that was simple enough. I actually really like making homemade pizza. I had dough, pizza sauce, cheese — I texted her back and asked her what toppings she wanted.

“No,” she said. “I need Pizza Hut pizza. Greasy Pizza Hut cheese pizza. And an order of cheesy bread. With marinara dipping sauce.”

“So, two cheese pizzas?” I texted back.

Some cravings, of course, have more to do with basic deprivation. Erin is something of a beer connoisseur. She likes to sample many different flavors and varieties. So she has a cabinet with several bottles that have been growing dusty since we found out she was pregnant. She recently posted photographs of them to a Facebook group of other aficionados, asking if they thought the beer would still be drinkable come October.

The topper, as far as cravings go, came a few weeks ago when I discovered Oreo now has Dunkin Donuts Mocha-flavored cookies. Now I’m something of an Oreo connoisseur. I like to sample many different flavors and varieties. So I brought a pack home for us to try. I opened it and Erin took a cookie. Then she took another one. Then another. Pretty soon I was being reminded of Garfield on lasagna day, when his hands move so fast that Jim Davis’s ghost artist doesn’t even have to draw them, and when I blinked, half the pack was gone. Erin looked up at me, blushing.

“I haven’t had coffee since January,” she explained.

I told her it was okay. Clearly, the baby wanted the cookies.

Over the course of her pregnancy, a few of the other things Erin has told me I should do or give her because “the baby wants it” includes — but is not limited to — the following:

The thing is, I’ve complied with literally every one of the above requests. Because she’s pregnant and I know she gets tired and worn out easily, I know it’s not easy for her to be on her feet long enough to wash the dishes or bend over and empty out the washing machine. Because I know that she’s got all of the same emotional changes I have that come with waiting to become a parent, and on top of that, she’s got a million physical changes to contend with that I couldn’t possibly understand.

And mostly, because I love her. So I’ll do what I can for her.

Except for the ice cream. Especially if it’s Blue Bell’s Groom’s Cake flavor, because that stuff is worth staring down a pregnant woman over.

You’ve got to draw the line somewhere.

You may have heard, Blake and Erin have a baby on the way, so he hopes you’ll allow him to remind you he’s got all these books and short stories for sale on Amazon, and suggest you follow his author’s page on Facebook.