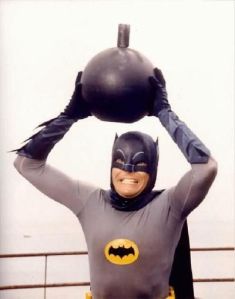 I have a complicated relationship with Adam West.

This is not to suggest I ever met the man, because I never did. Nor am I going to pretend to be greatly familiar with his body of work beyond the Batman TV series or other roles which were deliberately derivative or satirical of that series. I’m pretty sure the only acting role I ever saw him take where he wasn’t playing Batman, a Batman pastiche, or himself was on an episode of Mystery Science Theater 3000. I haven’t even read Burt Ward’s tell-all book about their time making that series, which would at least presumably offer a little more insight into who he was as a person. To me, and by no means to me alone, Adam West was simply Batman, full stop.

But it’s more complicated than that.

When I was a kid, like so many of us, I watched his Batman TV show. And as a child, I loved it. Yes, it was sometimes goofy and garish and sometimes the villain’s plots made absolutely no sense, but hey, it was still Batman. On TV.  This was in the 80s, remember, a time very much unlike today when there are a thousand comic book properties on television at any given time, and even more if you change the channel from the CW. It was great just to see Batman — or any superhero, for that matter — on TV in any form. It was pretty much all I required out of this show.

Then I made a tragic mistake, a mistake that so many of us make in our lives, a mistake that many of you have made, and that still others among you are probably going to make in the future.

I was almost 12 when Michael Keaton’s Batman movie was released in 1989. When I saw that, it was a game-changer for little Blake. This was the Batman I wanted to see. This was the Batman I read about in comic books. He was dark. He was brutal. He made people fear him, and at that point that was the only Batman I wanted. It got worse when I read things like The Dark Knight Returns or Year One. Suddenly there was no room in my world for a light-hearted, silly. campy Batman.

Not only that, but I grew irrationally, unreasonably angry at Adam West and Burt Ward for several years for the way their portrayal of Batman and Robin had tainted the reputation of the character for so much of the world. When people who didn’t read comics, people who didn’t know any better, talked about Batman, they talked about the silly costumes and the goofy gadgets. Every time the news said anything at all about comic books, the headline was full of “POW!” and “BAM!” Not only was Batman being disrespected, but the entire art form of comic books was being dragged down and it was all Adam West’s fault.

I know. But bear with me, please.

Then after a few years of this, I did something wise. Something that some of you have hopefully done. Something that, unlike growing older, is by no means guaranteed for all people.

It started with the works of Carl Barks and Don Rosa, rediscovering them in college. I saw the richness and depth of those stories, and I started to wonder why I had stopped reading them in the first place.

Oh yeah. Because they were Disney comics. And I, of course, was “too old” for such things.

I began to realize that just because something is appropriate for children does not mean that it is inherently without merit. Just because I liked something when I was younger did not prevent me from enjoying or appreciating it today. And so I re-embraced those things I loved — Disney and the Looney Tunes and the Muppets and more. And eventually, I went back and I gave Mr. West’s Batman another look.

To be fair, it’s still not my Batman anymore, but now I get that that’s okay. To be honest, it’s hard to define exactly which Batman is mine because there are so many different versions of him, and so many of them I enjoy. If I have to choose a single incarnation, on most days I’ll probably say my Batman was drawn by Jim Aparo and and written by Chuck Dixon. But that could change depending on which way the wind is blowing. There are so many excellent Batman creators out there, and so many great Batman performers, it seems absurd to limit myself to one. And what’s more, even those I don’t personally connect with, I can appreciate for their place in the mythology. Adam West may not have been my Batman, but I can appreciate the fact that he is Batman for so many people. I can appreciate that his Batman is entirely valid, just as much as Keaton, or Christian Bale, or Ben Affleck, or for that matter Will Arnett, and especially Kevin Conroy. All of their Batmen are as real as any other, and everybody is allowed to have as many Batmen as they want.

But that’s not just true of Batman, is it? How many people, over the years, have said that Lynda Carter was the one and only Wonder Woman? Up until last week, a lot more, probably. But as Gal Gadot has proven so beautifully, so effortlessly, there is absolutely room for others. Christopher Reeve was my Superman, but that doesn’t mean there’s anything wrong with George Reeves or Tom Welling or Dean Cain or Henry Cavill. There is room for these legendary characters to go beyond any one interpretation. There is room for everyone’s version, and somebody else having theirs doesn’t make yours bad. (This is not to say there are no bad versions of anything, of course, just that you need a more compelling reason than “It’s not the one I wanted” if you’re going to convince me that it’s bad.)

That was the most important lesson I think, that I learned from Adam West and Batman ‘66. There truly is room for everything.

Well, that, and that some days you just can’t get rid of a bomb.

One thought on “On bats, acceptance, and Adam West”